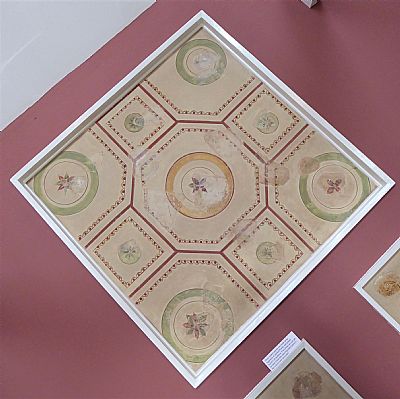 The plastered walls and ceilings of the baths and mansio were brightly decorated with painted designs. This pattern, from a ceiling, has been reconstructed from fragments found in the excavations of 1912-14- (the smaller, slightly darker areas are the original pieces) by comparison with more complete examples from other sites. A very similar design found at Wroxeter dates to the 2nd century AD. From these we know that the Wall plaster has been mounted incorrectly in the museum! It should be shown like this, turned 45 degrees, because the “corners” would actually have been halfway along the edge. They would have been complete octagons, outlined in red, like the one on the centre.